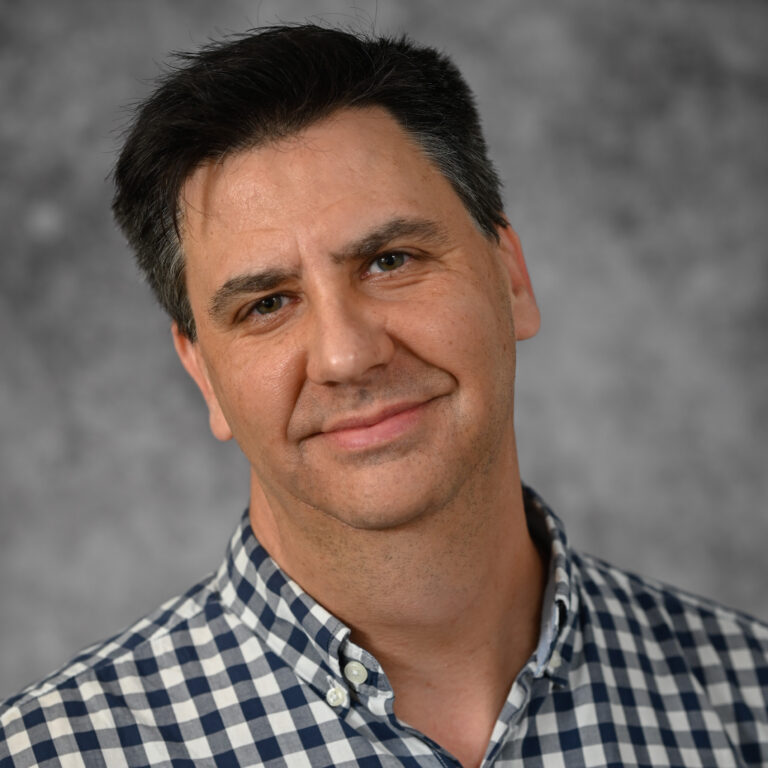 Timothy Stinson is Associate Professor of English and a University Faculty Scholar at North Carolina State University. He received his PhD in English Language and Literature in 2006 from the University of Virginia and was a postdoctoral fellow at Johns Hopkins University for two years prior to joining the NC State faculty in 2008. He is a member of the program faculty for the Communication, Rhetoric, and Digital Media Program and an affiliate faculty of the Jewish Studies program.

Stinson’s research has garnered numerous awards and grants, including support from the Andrew W. Mellon Foundation, the National Endowment for the Humanities, the Council on Information and Library Resources, and the Bibliographical Society of America, and he has held fellowships from both the NEH and the National Humanities Center. He has published in leading journals in the field of medieval studies and book history, including Speculum: A Journal of Medieval Studies, The Chaucer Review,The Yearbook of Langland Studies, Manuscript Studies, and The Papers of the Bibliographical Society of America. His work has also garnered recognition and support from North Carolina State University, where he is a University Faculty Scholar and has received a CHASS Research Award, two Research and Innovation Seed Funding Awards, and a Non-Laboratory Scholarship/Research Award. His research interests include Middle English poetry, codicology, history of the book, and digital humanities.

Stinson is a leader in the application of digital technologies to medieval studies. He is co-founder and co-director of the Medieval Electronic Scholarly Alliance, director of the Society for Early English and Norse Electronic Texts (SEENET), co-director of the Piers Plowman Electronic Archive, associate director of the Advanced Research Consortium (ARC), and editor of the Siege of Jerusalem Electronic Archive. He is the recipient of a National Endowment for the Humanities Digital Humanities Fellowship and has received planning and implementation grants from the Andrew W. Mellon Foundation for his digital humanities work. He has served on the advisory boards of numerous projects in the field, including the Roman de la Rose Digital Library, Europeana Regia, and the Medieval Academy of America’s Digital Initiatives Advisory Board. Stinson has also collaborated with colleagues in the biological sciences to analyze the DNA found in medieval parchment manuscripts. This work has garnered international press coverage in outlets such as the BBC’s The World Today, National Geographic, Science, and The Chronicle of Higher Education.

Stinson is a devoted teacher and a recipient of the NC State Oustanding Teacher Award. He has helped to develop new curricula and courses in the fields of medieval English literature, history of the book, and digital humanities at NC State. He is a contributor to the MLA’s Approaches to Teaching Chaucer’s Canterbury Tales and collaborated on the creation of a history of the book teaching collection in the NC State Department of English.

“‘Al for some conclusioun’: Trinitarian Structure and the Final Stanza of Chaucer’s Troilus.” Forthcoming, Chaucer Review 58.1 (2023).

With Simon Hickinbotham, Sarah Fiddyment, and Matthew J. Collins. “How to Get Your Goat: Automated Identification of Species from MALDI-ToF Spectra.” Bioinformatics 36.2 (2020).

“Of Dwarves and Dinosaurs: Moving on from mouvance in Digital Editions” in Meeting the Medieval in a Digital World. ARC Humanities Press, 2018: 143-56.

“What is Piers Plowman?” The Routledge Research Companion to Digital Medieval Literature, Routledge, 2017: 82-91.

With James Knowles. “Special Report: The Piers Plowman Electronic Archive on the Web: An Introduction.”   Yearbook of Langland Studies 28 (2014): 225-38.

“Makeres of the Mind: Authorial Intention, Editorial Practice, and The Siege of Jerusalem.” The Yearbook of Langland Studies 24 (2010): 39-62.

I have published more than a dozen specially commissioned codicological descriptions of medieval manuscripts online via the Roman de la Rose Digital Library and e-codices: Virtual Manuscript Library of Switzerland. Each description is based on in-person consultation of the book and research on its origins and provenance. Included in this list are books from the Bayerische Staatsbibliothek, the Bibliothèque nationale de France, the Bodleian Library, the Fondation Martin Bodmer, the J. Paul Getty Museum, Lausanne Bibliothèque Cantonale et Universitaire, the Morgan Library, the University of Pennsylvania, the Walters Art Museum, and several private collections.

“The Potential Biocodicology Holds for the Humanities” (with Bruce Holsinger). “Biocodicology: The Parchment Record and the Biology of the Book.” Folger Institute Scholarly Program, Folger Shakespeare Library, Washingtons D.C., May 2019.

“Old Meets New: Describing and Cataloging Manuscripts in a Digital Age.” Manuscript Cataloging in a Comparative Perspective, Hamburg Centre for the Study of Manuscript Cultures, May 2018.

Panelist. Roundtable: What Do We Want Out of Book Reviews (and Book Reviewers)? New Chaucer Society, London, July 2016.

“(Im)material Bodies: The Absent Jew and The Siege of Jerusalem,” 50th International Congress on Medieval Studies, Kalamazoo, MI, May 2015.

“Confession, Vengeance, and the Destruction of Jerusalem,” Remembering Jerusalem: Imagination, Memory, and the City,” University of London, November 2014.

“Medieval Textuality and Translatio in the Digital Age.” Society for Textual Scholarship, University of Texas at Austin, May 2012.

Panelist. “What Every (Digital) Medievalist Should Know.” 46th International Congress on Medieval Studies, Kalamazoo, MI, May 2011.

“DNA Analysis and the Study of Medieval Parchment Books.” Material Cultures 2010, Centre for the History of the Book, University of Edinburgh, July 2010.

“Across the Gulf of Centuries: Representations of Medieval Translatio in the Age of Print.” Modern Language Association, Chicago, December 2007

“Translatio and Textual Transformation in The Siege of Jerusalem: An Editorial Case Study.” 42nd International Congress on Medieval Studies, Kalamazoo, MI, May 2007

“Everything Old is New Again: The Re-emergence of Medieval Polyvocality in Digital Manuscript Archives.”  Maryland Institute for Technology in the Humanities, Digital Dialogues and Speakers, October 2006

Council on Library and Information Resources, Postdoctoral Fellowship in Data Curation for Medieval Studies (co-author with Steve Morris, NCSU Libraries), 2016-2018.  $154,800 awarded to North Carolina State University to fund a two-year fellowship that provides a recent Ph.D. with professional development, education, and training opportunities in data curation for the humanities, specifically in sub-disciplines related to Medieval Studies.

Council on Library and Information Resources, co-author (with Steve Morris, NCSU Libraries) of proposal that resulted in $154,800 award to North Carolina State University to fund Postdoctoral Fellowship in Data Curation for Medieval Studies. June 2013-May 2015.

Council on Library and Information Resources, co-Principal Investigator, “The Ecosystem of the Archive (affiliated with CLIR’s “Observations on Scholarly Engagement with Hidden Special Collections and Archives”), $15,750,  September 2011.