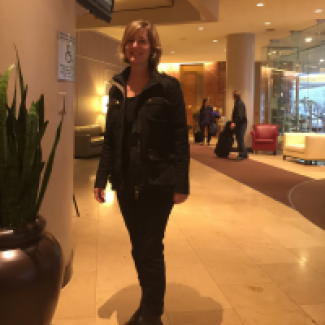 My book, The Geopoetics of Modernism (University Press of Florida, February 2015), focuses on the intersections between globally-oriented modernist American poetry and academic and middlebrow forms of geography of the time, specifically the cosmological geography of Alexander von Humboldt and Mary Somerville, the environmental determinism of Ellen Churchill Semple, and versions of environmental determinism that animate the National Geographic Magazine.

I am the current Co-Chair (with Celena Kusch)  of The H.D. International Society.  For information about the Society and H.D. (Hilda Doolittle), who generated significant modernist poetry, novels, memoirs, short stories, essays, and literary and film criticism, and who also starred in and helped generate avant garde film, check out the society’s newly revamped website (which is hosted at NC State thanks to the English Department):

The Geopoetics of Modernism.  Gainesville, FL: University Press of Florida, 2015.

The courses I typically teach focus on the literatures of transatlantic/transnational modernism, American literature and culture from the perspective of transnationalism and Empire, and world literature. My research focuses on these areas, with particular attention to space/spatiality, migration, race, and gender/sexuality. I value interdisciplinary and cultural studies approaches to literature and film, and draw on cultural geography, postcolonial theory, diaspora studies, and feminist/queer theory. I was recently elected Program Chair of the Modernist Studies Association and will be serving a three-year term on the MSA Board (2017-2020).

Earlier in my time at NC State I served as the faculty sponsor for our department's Alpha Pi Theta chapter of Sigma Tau Delta, the international English Honors society. Associate Professor Christopher Crosbie now serves as the new chapter sponsor.