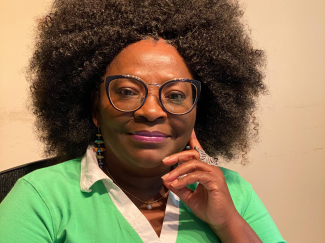 Dr. Nfah-Abbenyi is a Distinguished Professor of English and Comparative Literature and currently Assistant Dean for Diversity in the College of Humanities and Social Sciences at NC State. She is a Delegate to the UNC System Faculty Assembly and serves on the Modern Language Association (MLA) Executive Committee of the LLC (Languages, Literatures and Cultures) African since 1990 forum and the LLC’s Delegate Assembly. She served for six years from 2012-2018 on the Executive Council of the African Literature Association (ALA) during which she also served as Vice President and the 42nd President of the ALA.

Dr. Nfah-Abbenyi is the author of Gender in African Women’s Writing: Identity, Sexuality, and Difference (Indiana University Press, 1997), Your Madness, Not Mine: Stories of Cameroon (Ohio University Press, 1999), The Sacred Door and Other Stories: Cameroon Folktales of the Beba (Ohio University Press, 2008), Reflections: An Anthology of New Works by African Women Poets, edited with Anthonia Kalu and Omofolabo Ajayi-Soyinka (Lynne Rienner Publishers, 2013). She served as Co-editor of a special double issue of Journal des Africanistes 80.1-2 (2010) on “Création littéraire et archives de la mémoire/Literary Creation and the Archives of Memory” and has served as Guest Editor of special journal issues: The Global South 5.2 (2011) on “Indigenous Knowledge and Intellectual Property Rights in the Age of Globalization”; Free Verse 22 (2012) on “Anglophone Cameroonian Poetry”; Tydskrif vir Letterkunde (Journal for Literature) 53.1 (2016) on “Cameroon Literature”; JALA: Journal of the African Literature Association 13.1 (2019) on “The Environments of African Literature”; JALA 14.2 (2020) on “Fragmented Nation or the Anglophone-Francophone Problem in Cameroon.”

Dr. Nfah-Abbenyi writes fiction under the pen name Makuchi. Her short story, “Woman of the Lake,” a story about the 1986 Lake Nyos disaster that devastated and wiped out entire communities in the North West Region of Cameroon was nominated for the Pushcart Prize. She discusses her book The Sacred Door and Other Stories: Cameroon Folktales of the Beba with Frank Stasio on NPR-WUNC’s “The State of Things”. See her CV for more publications, invited lectures, fiction readings, conference presentations, university, state, national and international activities and engagements.