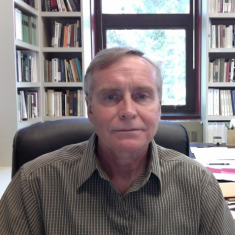 Antony Harrison’s interests include British 19th century studies, women’s studies, literary theory, art theory, and digital humanities. Since receiving his Ph. D. from the University of Chicago, he has taught at North Carolina State, where he currently is  University Distinguished Professor of English.  In 1992 he received the NCSU Alumni Distinguished Research Professor award, one of only three annual awardees. He has held fellowships from the National Humanities Center, the National Endowment for the Humanities, the Folger Shakespeare Library, and the American Council of Learned Societies. His undergraduate degree is from Stanford University.

Harrison is perhaps best known for his five authored books on Victorian and Romantic poetry and his four-volume edition of the letters of Christina Rossetti.

Harrison´s research interests include textual editing, gender studies, critical theory (especially historicist), nineteenth-century English poetry, the digital humanities, and the history of the book. His most recent singly authored book is The Cultural Production of Matthew Arnold (2009). He has also co-authored Victoria’s Lost Pavilion: From Nineteenth-Century Aesthetics to Digital Humanities (2017, with Paul Fyfe, David Hill, Sharon Joffe, and Sharon Setzer), and co-edited the COVE edition of Christina Rossetti’s most famous poem, “Goblin Market.” He has edited The Letters of Christina Rossetti (4 volumes) and served as a Completing Editor for The Correspondence of Dante Gabriel Rossetti. His earlier publications include two theorized studies of Victorian poetry: Victorian Poets and the Politics of Culture: Discourse and Ideology, and Victorian Poets and Romantic Poems: Intertextuality and Ideology; books on Christina Rossetti and A.C. Swinburne; and edited collections of essays on Christina Rossetti and on gender issues in Victorian poetry. He has also co-edited the Blackwell Companion to Victorian Poetry and serves on the editorial boards of Victorian Poetry, Victorian Institute Journal,The Journal of Pre-Raphaelite Studies, the Dante Rossetti Archive, Nineteenth-Century Studies, RaVoN, Review 19, and NINES. He has held grants from the National Endowment for the humanities (three times) as well as the ACLS, and he has been a fellow at the National Humanities Center and the Folger Shakespeare Library.