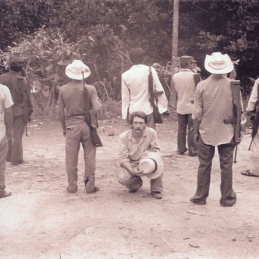 Dick J. Reavis is a Texas journalist, hired by NCSU in 2004. He is a former reporter at the San Antonio Light and the San Antonio Express, and a former Senior Editor at Texas Monthly magazine. He has written six books and recently completed a web-based project which inncludes an introduction to and index of the Southern Worker, a newspaper clandestinely published by the Communist Party in Chattanooga and Birmingham, 1930-37.

He is also a veteran of the civil rights movement:  Southern Christian Leadership Conference, Marengo County, Ala., 1965-66.

M.A. English in Rhetoric The University of Texas at Arlington 1998