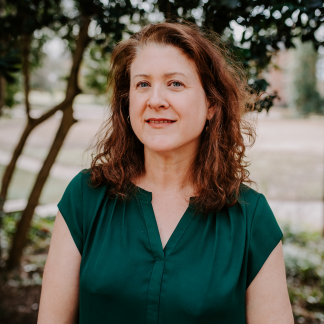 Anne Baker earned a Ph.D. in English from Columbia University and has taught at NCSU since 2001.  She specializes in nineteenth-century American literature and culture.

I am currently writing about Susanna Rowson (1762-1824), a novelist, actress, and educator who wrote the first best-selling novel in the United States.

My responsibilities include teaching undergraduate and graduate courses in my areas of specialization, writing books and articles, serving on committees, and advising MA students.

Work in Progress: A Cultural Biography of Susanna Rowson

“Geography, Pedagogy, and Race: Schoolbooks and Ideology in the Antebellum United States.” Proceedings of the American Antiquarian Society 113.1 (2003):163-190

Review of Leonard Tennenhouse, The Importance of Feeling English: American Literature and the British Diaspora, 1750-1850. In-between: Essays and Studies in Literary Criticism 15:2 (September 2006), 167-170.

Review of Bruce Harvey, American Geographics: U.S. National Narratives and the Representation of the Non-European World, 1830-1865, Leviathan: A Journal of Melville Studies 8:1 (March 2006), 96-98.

Review of Jimmie Killingsworth, Walt Whitman and the Earth. ISLE: Interdisciplinary Studies in Literature and the Environment 12.2 (Summer 2005).

Review of Cecelia Tichi, Embodiment of a Nation: Human Form in American Places, ISLE: Interdisciplinary Studies in Literature and the Environment 9.2 (Summer 2002): 262-263.

Review of Larzer Ziff, Writing in the New Nation: Prose, Print, and Politics in the Early United States, Amerikastudien 40 (Summer, 1995).

“Mapping Agency: The Geography of Naturalism in One of Ours.” International Cather Seminar, Northampton, MA, 2011.

“Geography and Naturalism in Cather’s One of Ours,” Louisville Conference on Language and Literature since 1900. Louisville, KY, 2011

“Tempestuous Passages: Storms and the Status of Women in the Fiction of Susanna Rowson,” Society for the Study of American Women Writers. Philadelphia, PA, 2009.

“Breathing at Blithedale: Air Quality, Sanitary Reform, and Hawthorne’s Utopian Romance” Association for the Study of Literature and the Environment, Spartanburg, SC, 2007.

“The Blithedale Romance and the Transatlantic Discourse of Disease.” Transatlanticism in American Literature: Emerson, Hawthorne, and Poe. Oxford, UK, 2006

“What to Israel Potter is the Fourth of July: Melville, Douglass, Agency, and History,” International Melville and Douglass Conference, New Bedford, MA, 2005.

“’Terrible Women’: Gender, Platonism, and Religion in Willa Cather’s The Professor’s House.” Society for the Study of American Women Writers. Fort Worth, TX, 2003.

“Pacific Culture and the Ironization of Vision in Melville’s Typee” Melville and the Pacific.  Lahaina, HI, 2003.

“Secularization and the Value of Nature.” Association for the Study of Literature and the Environment. London, UK, 2000.

“‘The Prince of Darkness Was His Surveyor’: Measuring Nature in Fremont and Thoreau.” Association for the Study of Literature and the Environment.  Kalamazoo, MI, 1999.

“‘A Connected and Accurate View of Our Continent’: Fremont’s Exploration Narratives and the Assimilation of the West.”  Western Literature Association/Canadian American Studies Association.  Banff, Canada, 1998.

“Looking at the West: the Act of Seeing in Margaret Fuller’s Summer on the Lakes.”  From the Frontier to La Frontera: American Women/American Landscapes.  Brooklyn, NY, 1995.

American literature and culture, the history of ideas, literature and the environment, gender studies, transatlantic literary relations in the eighteenth and nineteenth centuries.