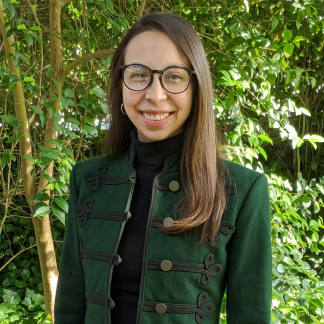 Tara Di Cassio is a lecturer in the Department of Foreign Languages and Literatures at NCSU. She teaches Beginning, Intermediate, and Advanced Arabic language courses and serves as Co-director and On-Site director for the NC State Jordan Study Abroad program at the Qasid Arabic Institute in Amman. She has also taught introductory courses in the Department of International Studies at NCSU.

Tara Di Cassio holds an M.A.in Global Studies from The University of North Carolina at Chapel Hill (2018) and a B.A. in International Studies with a concentration in the Middle East and South Asia from North Carolina State University (Valedictorian, Summa Cum Laude) (2010). She has been awarded several prestigious fellowships for the advanced study of Arabic at the graduate level in Amman, Jordan (The David L. Boren Fellowship 2014-2015, Center for Arabic Study Abroad (CASA I) Fellowship 2016-2017, and The Foreign Language and Area Studies (FLAS) Fellowship 2017-2018). During her graduate study, Tara served as a researcher with the Arab Studies Institute in Washington, D.C., Business-to-Business officer for one of Amman’s premier start-up’s – Jamalon.com, and support staff member for UNICEF’s “Makani” Project in Amman, Jordan. Prior to joining the faculty at NCSU, Tara worked as a Reception and Placement Officer and Intensive Case Management Mentorship Developer with Lutheran Refugee Services and taught Arabic language courses at UNC-Chapel Hill.

Research Interests: conceptions of the "political", social movements, counter cultures, creative resistance strategies, and the use of graffiti ("wall art") amongst the youth in the Middle East.