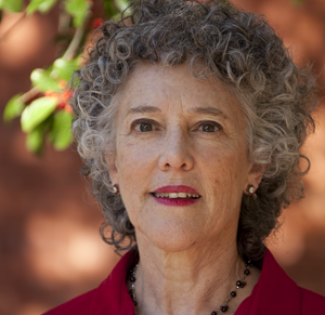 Sarah Stein is an Associate Professor in the Department of Communication, and teaches media production as well as criticism and theories of mediated communication. She received her Ph.D. in Communication Studies from the University of Iowa after a 25-year career in documentary filmmaking in New York City. Two of the documentaries she edited won Academy Awards, while others won Emmys, the Columbia-DuPont Journalism Award, and numerous domestic and international film festival awards. Dr. Stein is featured on the 2007 inaugural George Mason University Television series Studio A, their TV series on filmmakers, with an interview of her talking about her career.

Dr. Stein served from 2006-2009 as an Assistant Vice-Provost for Information Technology Special Projects. Her work as a member of NC State’s Virtual Computing Lab (VCL) team brings her scholarly communication perspective to bear on the cultural and social dynamics involved in advancing technological transformation. This project also draws on her command of visual media and digital multimedia to fashion the most effective uses of the VCL in meeting the needs of diverse educational environments. She is the PI of a 4year, $1.76M NSF ITEST (Innovative Technology Experiences for Students & Teachers) grant, bringing advanced math software to 9th & 10th graders in rural NC schools via the VCL and 1:1 laptops. She is the NC State Coordinator for the VCL-NC Community College System partnership using the VCL. Dr. Stein has twice received (2009 and 2012) the prestigious IBM Faculty Research Fellow Award.

Dr. Stein was a Coolidge Scholar in residence in New York City in July 2003 and a Frye Institute Fellow in Atlanta in June 2005. She serves as an affiliated faculty member for NC State’s Women and Gender Studies Program. Dr. Stein is a founder and the facilitator of the NC State Teaching, Learning & Technology Roundtable (TLTR), a campus-wide volunteer advisory council that provides a forum for issues of pedagogy and technology  (http://ncsu.edu/tltr). She chaired the annual Gertrude Cox Award for Innovative Excellence in Teaching with Technology at NC State from 2001-2010. Dr. Stein was the recipient of a NC State DELTA Distance Education Resource Grant to create web-based Who’s Online/Online, a faculty peer-to-peer tutorial on teaching with technology. She is a member of the DELTA (Distance Education & Learning Technology Applications) Advisory Board, and was a founding member of NC State’s SACS “LITRE” (Learning in a Technology-Rich Environment) Quality Enhancement Plan Steering Committee and Faculty Engagement Committee.

The Military and the Culture of Rape: a scholarly exploration into how the mainstream press has by omission promoted the culture of rape in the military. Dr. Stein is the recipient of a 2012-2013 CHASS Scholarship and Research Award to further this work. Her research on the subject has been presented thus far at the Gender and Conflict Workshop, High Point University; International Communication Association 64th Annual Convention, Seattle WA; 2014 What is Documentary? Conference, University of Oregon; Duke University & University of North Carolina Gender, War and Culture Seminar Series; and 2015 What is Journalism? Conference, University of Oregon.

Death and the Popular Media—how representations of death on television and other media promote the denial of death. Scholarly work as well as a documentary film.

Dr. Stein's scholarly emphasis is in Critical Media Studies, with interests in visual communication, gender, and new technologies, with particular attention to the rhetorical constructions used by technology advertising and social commentary. She teaches 16mm film production, video and digital production as well as media communication courses, including courses that integrate theoretical perspectives on the digital age. Her current scholarly research work is on on military sexual abuse as reported in mainstream media outlets such as newspapers. She is also researching portrayals of death in popular culture and its implications of denial of death. Dr. Stein is also producing two documentary films, "Death and the Popular Media," and the other on radical new avenues of women's spirituality called "The Edge of Change."