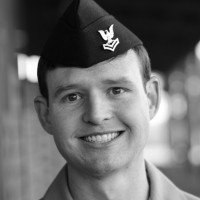 Cody Taylor’s research interests center around economic development in distressed communities and research methods. Cody is particularly interested in the administrative burden associated with accessing many economic development incentives and the inequities caused by such burdens. He earned his B.S. in political science and his masters in public administration from Appalachian State University in 2016 and 2020 respectively.

Cody is currently a research assistant with Dr. Jeff Diebold at NC State’s School of Public and International Affairs. In addition to being a student, Cody serves as a navy reservist and has experience in the intelligence community. He recently completed an internship with NCSU’s Laboratory of Analytic Sciences, where he used his knowledge of the intelligence community to collaborate on an eight-week interdisciplinary research project. Cody is also a student analyst with NC Growth at the UNC Kenan-Flagler Business School.

Before attending NCSU, Cody worked for the Gaston College Upward Bound program, advising underprivileged high school students and assisting them with their secondary and post-secondary pursuits. During this time he also served as a graduate fellow for Appalachian Community Capital’s Appalachia Economic Development Finance Program, which sparked his interest in economic development research.