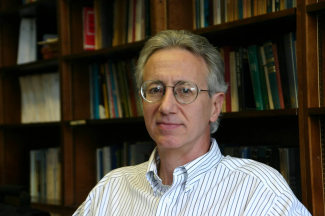 Jim Alchediak, a native of Tampa, Florida, earned his B.A. in Mass Communication from Loyola University of New Orleans, where he first developed interests in television and film production.

While still at Loyola, he began work at WGNO-TV, the independent commercial station in the New Orleans market. In his two years at WGNO, he worked as a production assistant, engineer, and operations director, and earned an FCC First Class Radiotelephone Operator License with Broadcast Endorsement.

Mr. Alchediak returned to Tampa and took a similar production/operations position at WTOG-TV. Soon after he earned a teaching assistantship at Ohio University’s School of Radio-Television. There he earned an M.A. in television production with a minor in film production, doing course work in screenwriting, documentary studies, and 16mm filmmaking and postproduction.

In 1977, Mr. Alchediak became an Instructor at Eastern Kentucky University’s Department of Mass Communication. In 1979 he joined the faculty at NC State’s Department of Communication, where he has taught courses in television, film and audio production and in scriptwriting and cinema history. Extension work has included video production for NCSU Humanities Extension/Publications. Among his productions are Talk About Writing, a series of portraits of North Carolina writers, and Living in Our World, a series of 40 instructional programs on world geography. Both series have been widely used in North Carolina classrooms.

Recent work may be viewed at http://news.chass.ncsu.edu/?tag=alumni-profile-videos