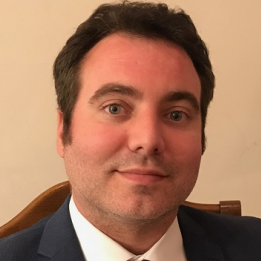 Chris Laws, a fourth-year PhD candidate in Public History at North Carolina State University, was born and raised in Durham, NC. After graduating from Riverside High School in 2002, he attended East Carolina University, earning a BA in History. From there, he gained work experience as a Historic Interpreter at Bennett Place State Historic Site and began his career as an educator in 2006, teaching at Riverside High School and Carrington Middle School from 2006-2015.

Chris joined the History Department at North Carolina Central University in the Fall of 2015 in pursuit of an MA in History. Under the direction of Dr. Charles Johnson, he wrote a thesis entitled, “The Rich Man’s Memory that the Poor Man Buys: Analysis of Confederate Monuments in the Piedmont Region of North Carolina, 1868-1914.” He finished his MA in the Spring of 2017, concentrating in Public History with a minor in Public Administration.

Chris’ areas of expertise are in Public History; Museums and Historic Site Interpretation; Monuments and Memorials; Collective Memory, Identity and Civil Religion; and US Southern History. He is currently working on his doctoral dissertation, titled, “The Millennium of Their Glory: North Carolina War Commemoration, 1867-1929,” under the direction of Dr. Craig Thompson Friend.