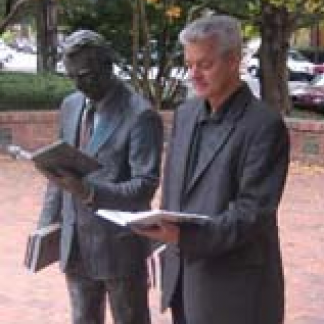 Dr. Dudley M. Marchi received his B.A. in English & American Literature from the University of Massachusetts-Amherst, M.A. Comparative Literature from the University of North Carolina-Chapel Hill, and Ph.D. in Comparative Literature from Columbia University.  He has been a faculty member in the Department of Foreign Languages & Literatures at NC State since 1989.  Dr. Marchi served as Assistant Department Head from 1997-2000, Interim Department Head from 2000-2003, and Associate Department Head from 2003-2019. His current research is on French-American relations, and his teaching on masterpieces of Western literature, French history and culture, and second-language acquisition. He has published articles and book reviews on Virginia Woolf, James Joyce, Charles Baudelaire, and Michel de Montaigne.  His first book, Montaigne among the Moderns: Receptions of the Essais, discusses the humanist and founder of the essay, Montaigne, and his influence on modern writers such as Ralph Waldo Emerson, Friedrich Nietzsche, and Virginia Woolf.  In 2011 he published a book on French American relations during the nineteenth and twentieth centuries, Baudelaire, Emerson, and the French-American Connection: Contrary Affinities, and in 2021 a book on the French Heritage of North Carolina.  He has recently taught courses in Translation, Masterpieces of literature, and French Art and Society.  He conducts outreach visits to public schools to teach European cultural history.  He authored the history of the Department of Foreign Languages and Literatures to commemorate its centennial (1896-1996) and oversaw the Department’s reception in 2003 of NC State’s Award for Departmental Teaching and Learning Excellence.  In the summer of 2009 he directed a study abroad program to Paris & Burgundy, France.  He directed the summer study abroad program to Paris & Lille, France in 2010, 2012, and 2017.  In 2011 he received NC State’s Outstanding Teaching Award.  He has also received several teaching awards from the College of Humanities & Social Sciences.