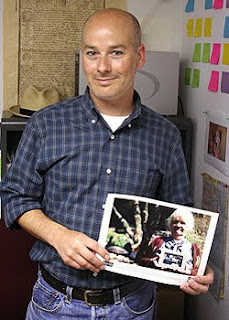 Neal Hutcheson has been awarded the Brown Hudson Award from the North Carolina Folklore Society for 2011. The announcement notes:

‘Neal Hutcheson is a documantary film-maker who has done extensive work on traditional culture in North Carolina. He has worked on films with N.C. State Professor Walt Wolfram for the North Carolina Language and Life Project. The NCLLP seeks to document North Carolina’s linguistic diversity and make the material available to a wide audience, including a curricula in the NC public schools. His films on language include Mountain Talk, Indian by Birth: the Lumbee Dialect, and The Carolina Brogue. He has also produced the Queen Family: Back Porch Music and Appalachian Tradition, which includes NEA Heritage Award Winner Mary Jane Queen. The Last One was an Emmy Award-winning documentary about the late moonshiner “Popcorn” Sutton.”