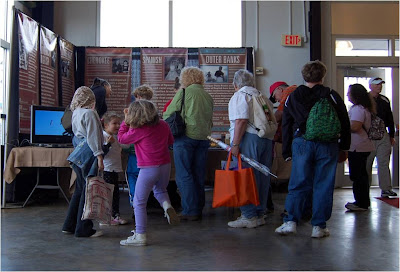 Funnel cakes, corn dogs and cotton candy – you can taste them all at the North Carolina State Fair. This year’s fairgoers got some extra flavor when they visited a CHASS exhibit celebrating the state’s richly-flavored stew of dialects.

The language and dialect booth, sponsored by the North Carolina Language and Life Project (NCLLP), introduced fair-goers to the state’s unique dialect and language traditions. Walt Wolfram, Director of the NCLLP, said that this novel venture was “an opportunity for visitors to celebrate one of its greatest cultural resources—its rich legacy of dialects and languages.”

The NCLLP exhibit included a variety of interactive posters, videos and audio stations. Visitors could see and hear language variations from across the Tar Heel State. An interactive quiz tested their knowledge of the difference between Mountain Talk and the Outer Banks dialect. You may want to brush up on your own dialect recognition skills . 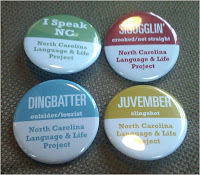 State fair visitors took away buttons identifying various dialect words such as “dingbatter” (outsider on Ocracoke), sigogglin” (‘crooked’ in the Mountains, and “juvember” (slingshot by the Lumbee Indians), as well as “I speak NC.” Wolfram noted that “North Carolina has one of the most varied dialect landscapes in the United States. I want folks to appreciate that tradition along with the state’s other cultural traditions.”

The exhibit was designed and constructed by Sarah Blackmon.

Check out this article about the NCLLP exhibit from a WRAL contributor.