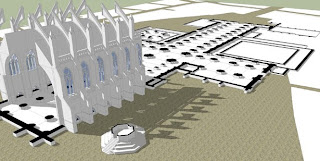 Can technology show us what it was like to hear John Donne preach in St. Paul’s courtyard?

While the time machine has not yet been invented to transport us back to 17th century England, CHASS Professor of English John Wall is attempting to use modern technology to do the next best thing – recreating an important scene involving politics, religion and literary figure John Donne. Best of all, he’s hoping to make it available to anyone who is interested.

John Donne is best known as a prominent English poet (at least to English majors), but he was also an important religious and political figure in 17th century London. Due to the Reformation and its aftermath, religion and politics were inextricably linked in England during this period. As dean of St. Paul’s Cathedral, a focal point of social, political and religious life in the largest city in England, Donne was a prominent man – and his sermons were often made in defense of royal policies, to the most influential crowds in the country. What would it be like to be there for one of those sermons?

Supported by a Digital Humanities Start-Up Grant from the National Endowment for the Humanities, Wall is working with an international team to recreate the sights and sounds of the sermon in virtual space.

Paul’s Cross was a freestanding outdoor pulpit where crowds would gather to hear sermons on Sundays and special religious days. And it was from Paul’s Cross that Donne preached a sermon on Sept. 15, 1622, in defense of his king. Specifically, Donne preached in defense of a tract called “Directions Concerning Preachers,” which was published at the behest of James I in an attempt to tamp down the potential for religious controversy. Ironically, James I’s “Directions” proved to be controversial in and of itself.

Drawing from historical images and a detailed survey of the original foundation prepared by St. Paul’s Cathedral’s resident archaeologist Dr. John Schofield, Hill and Stephens are creating an architectural model that will allow viewers to explore the area and see what this part of St. Paul’s looked like from any angle.

Wall is also working with U.K. linguistics researcher David Crystal to develop a script that will allow Donne’s sermon to be read in the same accent used in 17th century London. The sermon will be read by actor Ben Crystal in an anechoic chamber, which is designed to be acoustically neutral.

Wall will also be working with acoustic engineer Ben Markham to develop an acoustic model based on Hill’s architectural model. The acoustic model, coupled with Crystal’s acoustically neutral recording of the sermon, will be able to simulate the way the sermon would sound depending on where you are in the churchyard – or under different conditions (such as standing in a small crowd or a large one).

Once the audio-visual models are integrated, Wall says, “We want to use these tools to explore the way people could hear the sermon. For example, some historians believe that upwards of 6,000 people attended a Paul’s Cross sermon, but I’m skeptical about how well a crowd of thousands of people could hear what was going on. This can help us understand the context in which these pronouncements were received.”

By the end of 2012, Wall plans to have created a website where the general public can access the model and hear the sermon. Wall says the online version will also allow users to control some variables, such as the size of the crowd or the location of the listener.

The final version of the model will also be available to any researchers who want to modify it to reflect new findings or explore additional hypotheses.

Frankly, I’m excited about seeing the model in action. But then, I was an English major.

This article was first posted on NC State’s Abstract.