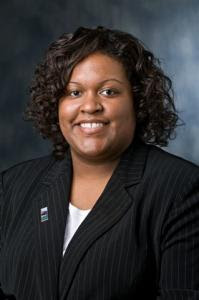 CHASS alumna Charmaine Fuller Cooper (MPA ’07) has a tough job. As Executive Director of the N.C. Justice for Sterilization Victims Foundation, a newly-formed division of the state’s Department of Administration, her role is to express the state’s formal apology to victims of the N.C. Eugenics Board. She is also charged with bringing together a diverse group of individuals and their families to agree upon a fair manner of compensation. The foundation works to provide justice for victims of the eugenics program that forcibly sterilized more than 7,600 people between 1929 and 1974.
As Rep. Larry Womble (D-Forsyth) said recently, “Not everybody can do this kind of work, but Charmaine has a proven track record and deserves the highest accolades. I’ve been involved with this issue for about 10 years now, and there was never any one person who I or victims could depend on. Her role is very important and pertinent to the successful resolution of this chapter in North Carolina history.”