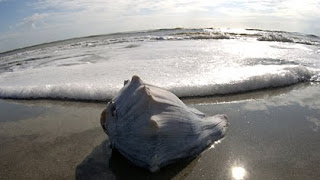 “The cure for anything is saltwater — sweat, tears, or the sea.”
—Isak Dinesen

From the moment she boarded the ferry for Bald Head Island, Sgt. Ruby Hendrickson could feel herself begin to relax. “I didn’t feel on guard,” says the reservist, who was recuperating from painful neck and shoulder injuries she suffered on her third deployment to Iraq.

Hendrickson never expected to vacation at a beach house where she could spend time with her daughter and new granddaughter and hunt for shells with her son-in-law, who is also recovering from serious combat injuries.

She heard about the opportunity while volunteering with the Soldiers and Family Support Center at Fort Bragg during weeks filled with doctor appointments and medical board paperwork.

“It was just the ticket I needed to get away,” Hendrickson says. “It was wonderful to stick my feet in the ocean.”

A Walk to Remember

Hendrickson’s vacation grew out of a walk on the beach months earlier. Keith Earnshaw, an NC State adjunct professor who teaches in the CHASS interdisciplinary studies program, has a home on Bald Head. He was exercising his dog when he began thinking about how the peaceful setting could benefit military families in North Carolina

“It seemed like it could be a good fit for families who have been through life-threatening situations to be able to take a break close to home,” says Earnshaw.

During spring and fall, Earnshaw saw many beach homes vacant. He decided to enlist people he knew to see if they’d be willing to donate time at their houses.

The result was Coastal Giving, a nonprofit that works with Fort Bragg’s Wounded Warrior program as well as the Children’s Miracle Network. The project takes donations solely for cleaning services before and after families visit, although military visitors have been known to leave the homes clean enough for a white glove inspection.

Hendrickson, a reservist since 1979, hopes other military families will take advantage of Coastal Giving. “After being in a combat zone, you have to ease back into the civilian world,” she says. “Soldiers in transition need time with their families for bonding.”

It’s good that the vacation was no trip to Disneyland, she adds. “A lot of people returning from combat have PTSD and they find it difficult to be around large crowds. The ocean is therapeutic.” On Bald Head, she and her family received plenty of smiles and helpful directions from local residents.

To learn more about Coastal Giving, contact Earnshaw at 919-818-1746 or earnshaw@mindspring.com.

by D’Lyn Ford. This story was first published in NC State’s Bulletin.