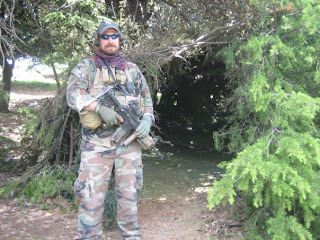 As a kid, Will Badger, MFA ’11, wanted to be a writer so he could explore all the places in his head he was sure he’d never go. Ironically, he’s doing both.

Sometimes you have to make a tough choice.

A Fulbright Scholarship or Oxford University in England?

It was a good problem to have for Will Badger, a 2011 graduate of NC State’s Creative Writing program. After all, just two years ago, Badger was serving in Afghanistan as a Green Beret medic, dodging death every day.

In the end, Badger chose Oxford. But the real question is, how did he end up at NC State at all?

An honors undergraduate of Brigham Young University, Badger enlisted in the military for a variety of reasons. “I had a desire to serve, although I wasn’t a big fan of the Iraq war,” said Badger, 33. “I thought that I needed to experience for myself and sort of do my part for the country before I could speak to any degree in a committed way about the rightness or wrongness of various enterprises.” The adventure, camaraderie and maybe even a little old fashioned romanticism appealed to him as well.

Badger completed the Special Forces Qualification Course while stationed at Ft. Bragg. He had always been a fan of science fiction and fantasy, and it was there he began closely reading the work of John Kessel, a professor in NC State’s Creative Writing MFA program and author of many popular works in that genre.

“I went to State just to meet John Kessel, actually, prior to my leaving, while I was still at Bragg and before leaving for Afghanistan,” Badger remembered. “We had a really great conversation.”

Kessel was the director of Creative Writing at the time and was also teaching undergraduate and graduate classes. “He made a lot of time for me, and we talked about writing,” Badger said. “He invited me to write him when I was overseas and I did. He encouraged me from there to consider applying to the MFA program.”

While he was still in Afghanistan, Badger learned he’d been accepted to the program, which surprised him at first. “I’ve always written and enjoyed it, but I didn’t know how formal my writing training would be or should be. The military, obviously, is a much different place. I don’t know how seriously I was considering formal study.”

Badger came home from Afghanistan in July 2009. He started the MFA program soon after. Toward the end of his first semester, Badger paid a visit to Wilton Barnhardt, a professor who had studied at Oxford and was then the MFA program director.

“I went to Wilton and told him I’d be interested in studying at Oxford,” Badger said. “He didn’t laugh me out of his office as he maybe should have. He asked me what I proposed to study there. I said, ‘Well, I’m still feeling that out.’

“Wilton said, ‘Find something you’re passionate about doing and come over to England with me in the summer, and I’ll introduce you to some folks I know there. We’ll do the best we can to make it happen if you really want to study there.’ From the first moment I walked in his office, he took me absolutely seriously as a writer. He was as good as his word.”

A few months later, Badger ended up in John Balaban’s poetry class. Balaban, the current MFA director, had been a conscientious objector to the Vietnam War, working for The Committee of Responsibility in Vietnam. As alternative service, Balaban treated war-injured children and evacuated them to the U.S. when necessary.

It was an interesting dynamic: the soldier and the conscientious objector.

“The Vietnam War caused any number of chasms in our society in the ‘60s and ‘70s,” Badger said. “He (Balaban) felt strongly against our involvement, at least on that level, in Vietnam and his beliefs took him there. I was really impressed with him as a person and as a writer because here was someone who felt strongly enough to involve himself personally. That said, I wasn’t sure how he would relate to a recent war vet; that’s because I didn’t know him at all. Actually, he was amazing. He went out of his way to make sure I felt comfortable.”

It was in Balaban’s class that Badger finally wrote about his war experiences in a poem called Afghani Chai. Balaban liked it so much he sent it to the international literary journal War, Literature and the Arts, thinking the journal would accept it. 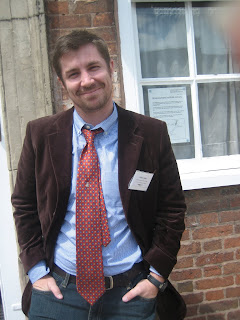 Next, Badger applied for a Fulbright Scholarship to translate Janusz Zajdel’s novel Limes inferior into English. He made connections at Warsaw University with scholars who were both excited and supportive of the project. With Barnhardt’s help, he also applied to Oxford.

“Usually you try to cast a fairly wide net and you never know what opportunities are going to present themselves,” Badger said. “I looked at a number of programs that I liked.” He never dreamed both Fulbright and Oxford would come calling.

In the end, his choice revolved around both logistics and family. His wife, Agnieszka, received a job transfer to England from her employer, Lenovo Group. Once that happened, it made more sense for Badger to go to Oxford. In England, both would work and could take their daughters—Daria, 6, and Hannah, 1—to visit their maternal grandparents in Poland.

At Oxford, Badger will study witchcraft in Shakespeare as well as the supernatural in the early modern period. He’ll be there for several years, first earning his Master of Studies before moving on to a Doctor of Philosophy.

Declining the Fulbright was tough, but his mentors supported him. “I sought out everyone’s advice before I made the final decision,” Badger said. “I don’t think there was a sole dissenter. Going straight to grad school made sense. The resume, the bullet point as far as that goes, will still be there that I won a Fulbright, and I’ll just be able to note that it was declined in favor of Oxford. But the project is still going ahead.”

That’s right. Badger still plans to translate Zajdel’s Limes inferior since he already has permission from the family.

“He’s a good writer and he’s probably going to be a brilliant scholar,” said Balaban. “Everything he does is done perfectly well. I guess the surprise to all of us is that he came to us from a battlefield as a medic in Afghanistan. Somehow, that almost seems irrelevant now.”

The following poem was composed in John Balaban’s poetry class and ran in the international literary journal War, Literature and the Arts (Volume 22, 2010).
http://wlajournal.com/22_1-2/22_1-2_poetry.html

“The first time you share tea with a Balti, you are a
stranger. The second time … an honored guest. The
third time … you become family.”
—from Three Cups of Tea, by G. Mortensen and D. Oliver

With the first cup
fathers elbowed children into razor wire
to grab the Pokemon backpacks passed out like party favors,
the chai sweet and steeped
with sugar that looked like quartz

The cups come from a Balti proverb, anyway.
Maybe their mountains are nice
this time of year.

A letter to the chancellor

I was recently named a Fulbright grantee to Poland for 2011-2012, and I was also accepted to undertake postgraduate study at Oxford University. Neither opportunity would have arisen without the comprehensive involvement of key NCSU faculty members.

NCSU is deservedly known for its engineering and agricultural research, and for cognate endeavors. Due to the strength of the faculty and their investment in the success of their students, the MFA in Creative Writing must also be considered one of the university’s strengths, and one of the best programs in the country. I will always be thankful for my time at NCSU.