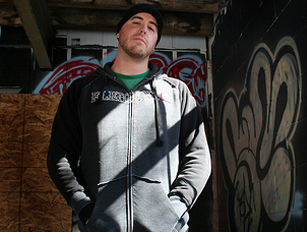 Just an excerpt from Josh Eure’s flash fiction story “It’s Sci-Fi,” which recently appeared in the Raleigh Review literary and arts magazine. While publication of his work is certainly cause for celebration, more congratulations are in store for Eure, who just graduated from NC State with an MFA in fiction. His story was also nominated for the prestigious Best of the Net award, and won placement in this year’s anthology.

The Best of the Net Anthology showcases some of the brightest up and coming writers of fiction, nonfiction, and poetry, and is circulated each year by Sundress Publications. The project is dedicated to promoting a diverse and growing collection of pieces by authors who, like Eure, choose to publish their work online.

Eure’s journey has certainly been a long and winding road. At 15, he dropped out of high school and left home for the Outer Banks to work. After a series of unconventional jobs–hammock weaving among them–Eure aimed for a goal no one in his family had previously achieved: a college degree. He took two years of community college classes after completing his GED, and then earned an undergraduate degree in Creative Writing at NC State. Before he was accepted into the MFA program, Eure won the coveted Dell Magazines Award for Excellence in Undergraduate Science Fiction and Fantasy Writing for his story, “We Were Real.”

For more on Eure’s history and his experience working with CHASS’s own creative writing expert Dr. John Kessell, check out a previous news piece on the Community of Scholars webpage.