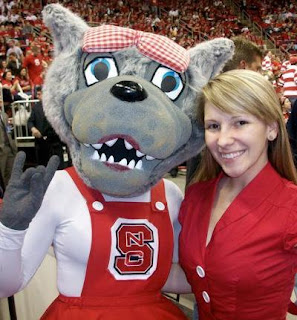 A big Wolfpack howl goes out to Kristy Craig, a senior in political science, who has earned the prestigious Mathews Medal for her contributions to NC State. Craig’s involvement as a student senator, director of the Athletics Commission, a representative to the U.S. Department of State, and president of the 2011 Senior Class exemplifies the leadership honored by the Mathews Medal.

Named after Walter J. Mathews, the medal is awarded to graduating seniors who have made significant contributions to the university and emerged as leaders during their undergraduate studies. In honor of the active alumnus Mathews, the award encourages student leaders to emerge as alumni leaders.

“I did a celebratory dance around my room,” said Craig on her response to learning she had been selected. “I was filled with a sense of honor and excitement.”

Craig’s enthusiasm led her to be involved as an Arch Regent of the Golden Chain Society, a community educator for the Triangle chapter of Susan G. Komen for the Cure, and as a liaison for Service NC State. “My desire to be involved resulted from my motivation to contribute to the world around me.”

Craig recognizes the value of being engaged of the wider community and hopes the Mathews Medal demonstrates her desire to continue to serve NC State. “If you choose not to become involved, you miss out on so much,” she said. “You never become fully aware of your surroundings, your ability to help others, or your own potential.”

Craig plans to gain work experience after graduation before heading back for a dual-degree program in International and Comparative Law. She hopes to help others through the defense of human rights at an international level.