Found in translation: student reflects on why he studies the Middle East 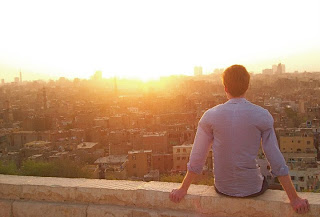 Evan Garris (Political Science 2011) says he was overcome with emotion recently while watching television reports of the jubilant crowds celebrating Hosni Mubarak’s resignation in Cairo’s Tahrir Square. The Smithfield, NC, native described his reaction to his Arabic teacher in the email reprinted below.

Garris had spent the summer of 2010 travelling in the Middle East, dividing his time between Egypt, the UAE, and Lebanon, as he studied with Jodi Khater (Foreign Languages and Literatures) and her husband Dr. Akram Khater (History).

Garris said in the course of his study abroad, he “experienced a critical awakening, or nahda, as it is called in Arabic. … I wanted to know if comparing lofty ideals like human rights and normative behaviors like gender and sexuality could even occur between cultures; if interpretation of these concepts is not impeded altogether by language or the lack thereof.”

While he was full of questions, he was also focused on language acquisition. “It was my most pressing need,” he said. “It determined my ability to move about freely, establish personal connections with people, and even eat. Even after three years of study, the Arabic language poses a unique set of challenges. Its countless dialects, unfamiliar vowels, and nearly impenetrable grammatical structures are enough to drive even the most experienced linguist completely batty.”

With the Khaters’ support, Garris became more fluent, and become better equipped to understand the region’s myriad political, cultural, and intellectual complexities. “My knowledge of Arabic and my understanding of Middle Eastern history have given me a way to to see and understand and interpret the world,” he said. “The Khaters are two of NC State University’s most gifted academics. Without their mentorship and friendship it is quite possible that I never would have opened my eyes to the world around me.”

After graduating in December, Garris plans to continue his education and pursue a PhD in Comparative Literature.

As you can well imagine, I’ve been glued to the news all day. Earlier, I caught a segment on CNN in which a correspondent was amidst the jubilant masses in Midan Tahrir. She spoke Arabic fluently, and was interviewing Egyptian men and women and then translating their words for CNN’s English-speaking audience. As for me, she could have eschewed the English translation altogether, because I found myself understanding every word spoken.

Anyways, I want to thank you for helping me acquire the skills needed to understand the thoughts and feelings of those interviewees in their native tongue. It was an extremely touching moment for me; like the barrier of the television screen had disappeared and I was standing with everyone in Midan Tahrir. Hearing the sheer joy, elation, and excitement in their voices—and more importantly, their words—brought me to tears.

Language, its power, and my experience living in Cairo have effectively humanized these events for me in a way I could never have imagined possible. So much of what I have come to know is either misrepresented or not represented in Western media and by pundits and politicians. I feel that a critical opportunity is lost in that absence of appropriate context, particularly the chance to construct a narrative that puts a human face on world events and emphasizes the incredible extent to which civilizations are interpenetrated. That absence owes a large part of its existence to the language barrier.

So again: thank you. I owe both you and Akram so much.

Executive Director of Development Marcy Engler to Step Down