Just Like Me: Online Training Helpers More Effective When They Resemble Students 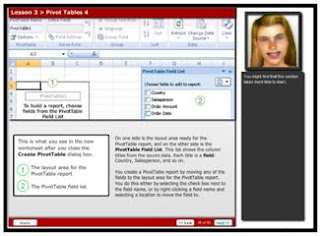 Opposites don’t always attract. A study from NC State University’s Department of Psychology shows that participants are happier – and perform better – when the electronic helpers used in online training programs resemble the participants themselves.

“It is important that the people who design online training programs understand that one size does not fit all,” says Dr. Lori Foster Thompson, an associate professor of psychology at NC State and co-author of the study. “Efforts to program helper agents that may be tailored to individuals can yield very positive results for the people taking the training.”

Online training students are more engaged and focused when the electronic “helper” is portrayed by an image that matches their race and gender.

Online training programs are becoming increasingly common, and are used for everything from developing work skills in employees to teaching children basic math skills. Many of these programs utilize electronic training agents, or “helpers,” to give feedback to users and help them through the coursework. But the usefulness of these helpers can vary, or even be annoying. Remember Clippy, the animated paper clip, from Microsoft?

NC State researchers set out to determine what characteristics make a training helper more effective. “We know from existing research on human interaction that we like people who are like us,” Foster Thompson says. “We wanted to see whether that held true for these training agents.”

The study also showed that perception could be more important than reality in participant performance. “We found that people liked the helper more, were more engaged and viewed the program more favorably when they perceived the helper agent as having a feedback style similar to their own – regardless of whether that was actually true,” Foster Thompson says.

The paper, “Similarity Effects in Online Training: Effects with Computerized Trainer Agents,” was co-authored by Foster Thompson and Dr. Tara Behrend, an assistant professor at George Washington University who worked on the study while a Ph.D. student at NC State. The paper is forthcoming from the journal Computers in Human Behavior.

NC State’s Department of Psychology is part of the university’s College of Humanities and Social Sciences.

Articles based on this research have been picked up by media outlets including Fast Company and The Chronicle of Higher Education.
Note to editors: The study abstract follows.

Abstract: In this study, trainees worked with computerized trainer agents that were either similar to them or different regarding appearance or feedback-giving style. Similarity was assessed objectively, based on appearance and feedback style matching, and subjectively, based on participants’ self-reported perceptions of similarity. Appearance similarity had few effects. Objective feedback similarity led to higher scores on a declarative knowledge test and higher liking for the trainer. Subjective feedback similarity was related to reactions, engagement, and liking for the trainer. Overall, results indicated that subjective similarity is more important in predicting training outcomes than objective similarity, and that surface-level similarity is less important than deep-level similarity. These results shed new light on the dynamics between e-learners and trainer agents, and inform the design of agent-based training.