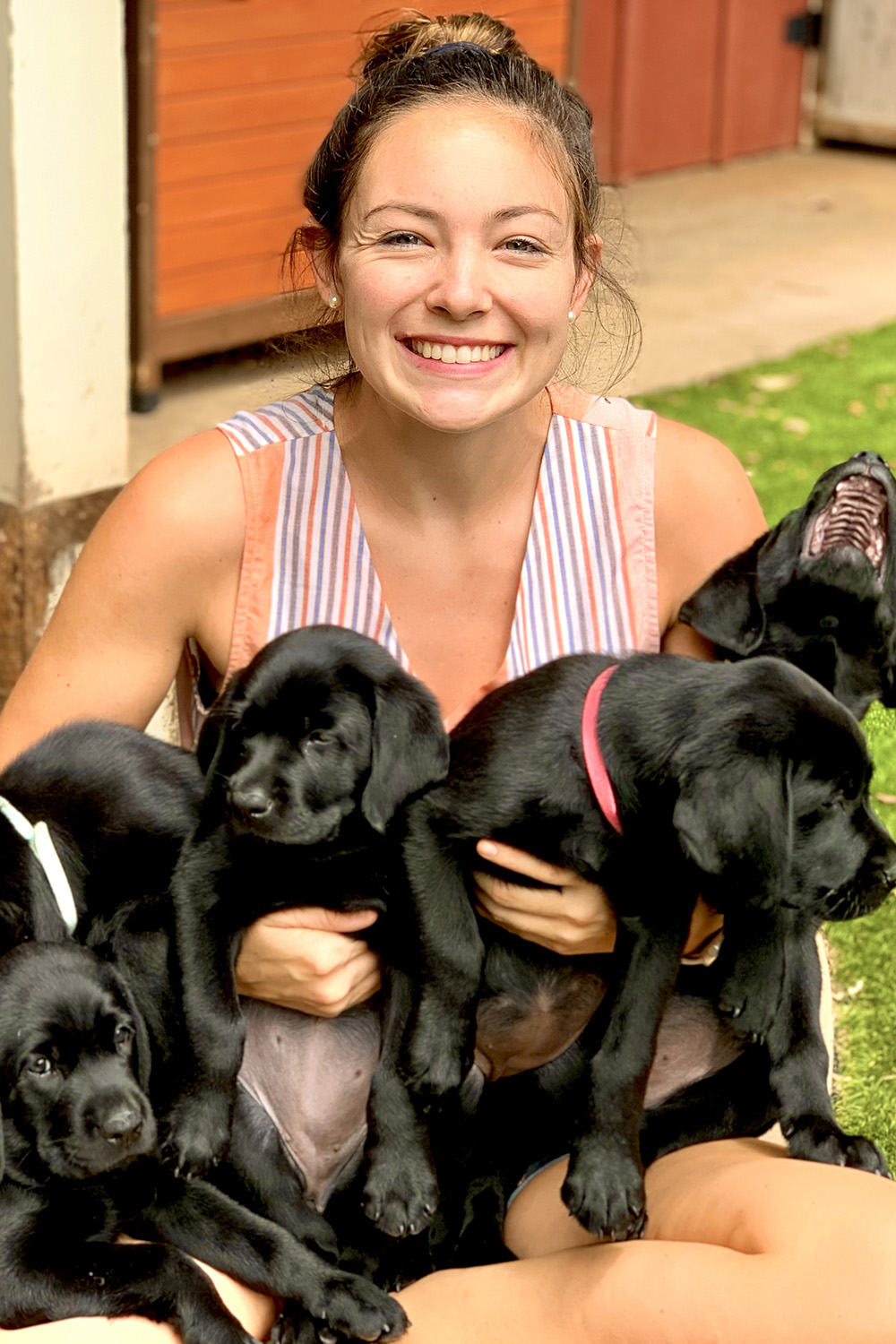 Zadoc likes to snuggle. He also enjoys swimming, belly rubs and midday naps. But at 3 years old, this Labrador retriever has some big responsibilities.

He’s the first full-time hospital facility dog at Shriners Hospitals for Children in Honolulu, Hawaii. On the job for a year and a half, Zadoc provides unconditional love in inpatient and outpatient settings.

“It’s rewarding to see them fulfill their purpose,” says Sydney Champion, a psychology alumna who raised Zadoc as an intern with Assistance Dogs of Hawaii. In addition to training hospital and courthouse facility dogs, the nonprofit provides children and adults with disabilities trained dogs to increase their independence.

“We specialize in training dogs for people with limited mobility,“ Champion says. “Getting to see the smiles on clients’ faces when they’re bonding … it’s special.”

Champion, now a program assistant with the organization, says it’s a career path she never saw coming — but so far, it’s taken her across the world and back. She credits NC State for helping pave the way.

“You never know what’s going to spark that new dream in you,” she says.

Growing up, Champion wanted to be a veterinarian. But after taking her first psychology course in high school, something clicked.

“Studying the brain and how it works, how people think, why they do what they do,” she explains. “I realized I was always interested in it, but I never put a word to it.”

Turns out it was a perfect fit.

“Psychology not only applies to people, it applies to dogs,” she says. “Those are my two favorite things.”

She was quickly able to combine her interests on campus. While pursuing a bachelor’s degree in psychology and a minor in Spanish, she decided to take a few animal sciences courses. Champion also joined the Companion Animal Club and volunteered with Vets to Vets United in Durham. It was ultimately a guest speaker who sparked her interest in a career with service dogs.

“That was the first time I had been exposed to that kind of work as a realistic option for me,” she says.

Champion graduated in 2019, and things moved quickly from there.

“I flew to Hawaii a week after graduation,” she laughs. “As an intern [with Assistance Dogs of Hawaii], I learned all about how to train the dogs from puppyhood up until they’re 1-2 years old and ready to be placed.”

She spent three months in Hawaii, three months at Assistance Dogs Northwest in Washington state, and then returned to the Aloha state for a year-long apprenticeship.

“The internship allowed me to have real-life experience and learn so much,” she says. “I got to use my psychology background in positive reinforcement and even statistics.”

A Day in the Life

Most days started with the same schedule: wake up, let the dogs out, walk them, feed them, brush them … and then the workday began. From 9 a.m. to 4 p.m., Champion trained each dog for new skills. They also went on two field trips a week.

“We would go to Target, Home Depot, Lowe’s and the airport,” Champion recalls. “Touching the crosswalk button with their nose is a good skill to practice. We would also take them to the mall so they could practice on the elevators.”

More advanced dogs go out with a trainer in a wheelchair, simulating a real-life situation. They’re taught how to turn on and off lights, open doors and retrieve items that are out of reach.

“As [the dogs] get closer to being placed, we start slowly trying to act more like the client,” Champion says. “For example, we’ll lower our voice to a whisper because many of our clients can’t project.”

Champion’s days look a little different now. She says her role has “adapted and changed as [her] life has gone on.” She now works remotely, focusing on client support, marketing and social media.

“I missed working and training, so I picked up Jones from Assistance Dogs Northwest,” she says. “He looks pretty much just like my other one, Zadoc.”

Jones will likely begin his on-site, advanced training in April. As for Sydney, she’s looking to attend graduate school to pursue a career in occupational therapy — and to one day have a facility dog of her own.

“Take the opportunities that you get. I’m so glad that I took the risk.”