What can you do with an NC State degree in sociology? Ask Jill Brown, exhibits technician and former zookeeper at the Museum of Life and Science in Durham.

Within the museum’s Carolina Wildlife exhibit is an enclosure for its resident striped skunk, Florian, replete with a cozy new bed. Elsewhere, seven ring-tailed lemurs reside in a habitat outfitted with wooden platforms for climbing, jumping and plain ol’ relaxing.

Brown, part of the exhibits team since January 2020, helped design and build those pieces, as she does for other habitats and displays throughout the museum. An animal lover, she also calls upon more than 14 years of past experience on the animal care staff to ensure her creations serve the residents’ needs.

For Lemurs, which can face heat stress in the summer, staying cool is essential. So, Brown designed their new platforms with a cooling column to keep the small primates refreshed on hot days.

Providing the museum’s more than 64 rescued animals with a safe, secure and fun environment, and keeping the exhibits fully stocked and functional is hard work.

“Nearly everything in the museum is interactive,” Brown says. “There are water features, pumps, plumbing and treehouses to maintain, and buttons, gears and computer programs to run. It’s a know-something-about-everything type of job.”

Every day is different, and ranges from the routine of opening the museum to researching a design and bringing it to life. An example, Brown says, is shaping Florian the skunk’s bed from 12-inch white PVC pipes and making them look like natural logs. Brown built a second sleeping log for the resident mink.

“Seeing the animals or people interact with something I made or imagined is rewarding,” she says. 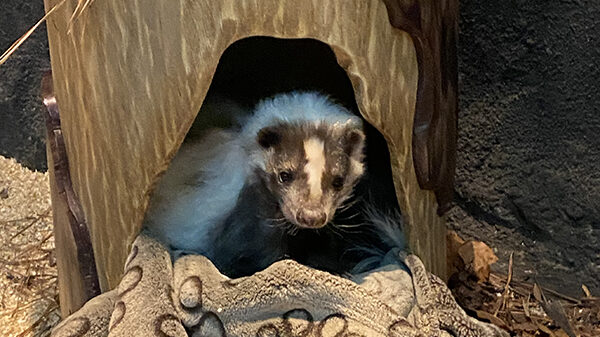 Brown and her team recently built sleeping logs out of 12-inch PVC pipe for some of the residents of Carolina Wildlife.

Learn more about the project

Brown’s interest in animals started when she was a kid growing up in New York, watching documentaries on PBS and visiting the Bronx Zoo and various natural history museums. “My parents also allowed me to care for exotic pets like a horse, a parrot and a rabbit, starting at age 11,” she adds.

At the museum in Durham, Brown loves working with the skunk and with a resident blue jay. She says the former hits the training goals she sets, and the latter, whose species is typically difficult to train, has a cavalier attitude.

“I studied sociology because I liked learning about what motivated people in a society to act the way they do,” she says. “When I graduated, I decided to try a different career path.”

She applied for a position at the museum that later turned into what Brown called her dream job. It’s a decision she will never regret.

Her sociology training comes in handy when dealing with exhibits that feature social interactions among people.

“It’s interesting to see how kids who don’t know one another interact when working together for a common goal,” she adds.

Brown says her time at NC State exposed her to varied people and cultures, empowered her to become more social, and gave her the confidence to travel to different places outside her comfort zone.

“I value the friendships I made, and experiences I had, and they are still with me 20 years after I graduated.”