Christopher Ruocchio graduated from NC State’s Department of English with a bachelor’s degree in 2015. His science fiction novel Empire of Silence follows a man in the galaxy who is revered as a hero and despised as a murderer. We caught up with Ruocchio to learn more about his time at NC State and life as a writer.

I thought it was cool. That sounds silly, but I have always told stories. This one grew in the telling from the sort of nonsense we all make up as kids. Hadrian, the Sollan Empire, the Cielcin, Valka, and the rest all exist just because I think the story is interesting and entertaining and that bookstores are cooler with it on their shelves than not. A lot of writers want to change minds or raise awareness — and I won’t pretend I don’t stand for things — but my primary purpose is as an entertainer. I take as my examples writers like Edgar Rice Burroughs and Robert E. Howard, writers who knew you have to entertain first. I was a Star Wars kid, drawn to far off lands, high adventure, sword fights and princesses among the stars.

How did writing your first novel differ from the other books you’ve written?

I had time! I wrote Empire of Silence in my last couple of  years of high school and all through my time at NC State. It wasn’t due, so I had the luxury of playing with it until it was just right — though I got very serious about it in senior year as graduation neared. My subsequent volumes had to be turned around quickly, so I had to develop time management skills which are — if you will forgive me for saying so — alien to most artists, regardless of their medium. The thing that really separates the professionals from the hobbyists is their conscientiousness, not their creativity.

It seems unfair to pick one, seeing as I had so many wonderful teachers whose instruction I value very much: Marvin Hunt and Cat Warren, Gary Matthews and Dustin Heinen, and John Kessel perhaps most of all. But I think the classes that most impacted me were ENG 288 and 388 (Intro and Intermediate Fiction Writing). Not for any skill or knowledge conferred, but because I made so many friends there. I’ve discovered that almost all of my college friends with whom I have remained in touch were from one of those two classes, and while a class may impart some experience or instruction, a good friend (much less five or six of them) is beyond price.

I’m a great fan of audiobooks because they let me read while I’m in the car or making dinner. So much of my time is given over to my day job and to writing that it is very hard to block out time just to sit and read. When I do sit down, it’s behind the computer to write!

I wake up at 6 a.m. every day and write until I have to go to work, just before 9 a.m. When I get home, I make dinner and work from about 7 p.m. to about 11 p.m., go to sleep and do it again. On the weekends I’ll work straight through the day until I can’t keep doing it. It’s exhausting, but the only way to finish Game of Thrones-sized books in a year while working full time. I don’t want to let my readers down.

I am just muddling through the ending of my third Sun Eater novel, Demon in White. The second book, Howling Dark, just came out and I am about to go on tour with it. Hopefully, the third book will be done before I leave and I’ll be able to enjoy my adventures without the prospect of a deadline hanging over my head. After that, I have a small break during which I mean to hammer out three or four short stories before I jump in and get to work on book four. Unless you make it big, professional writers have to be like sharks: we have to keep swimming, or we die. 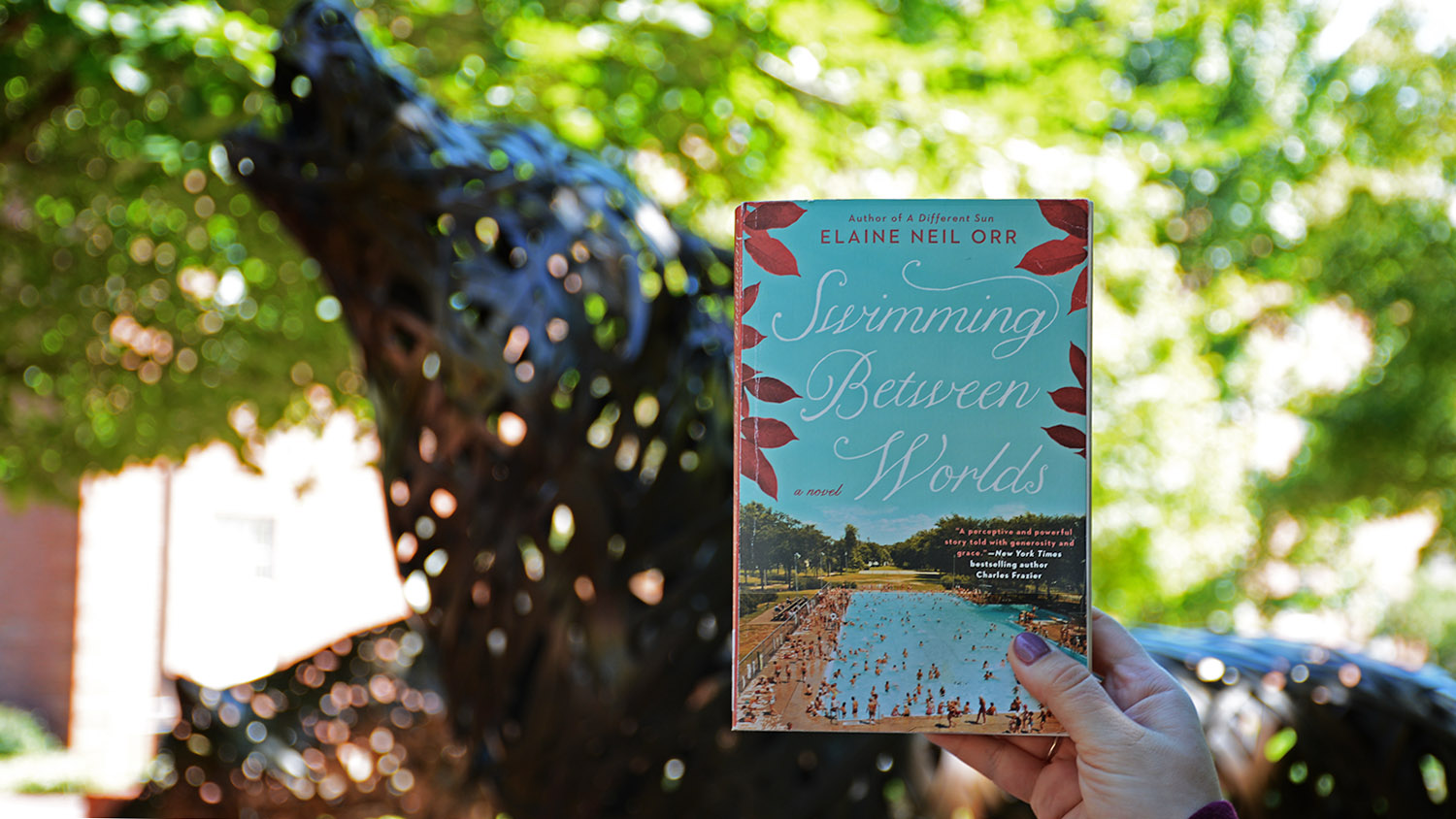 We caught up with English professor Elaine Neil Orr to learn more about her historical novel “Swimming Between Worlds.”