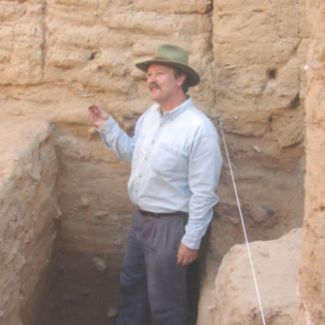 The Limes Arabicus Project: The Roman Frontier in Central Jordan (fieldwork conducted between 1980 and 1989; two volume final report published in 2006).

The Roman Aqaba Project: The Economy of the Roman Port on Aila on the Red Sea (fieldwork conducted between 1994 and 2003; first volume of the final report published in 2014, v. 2-3 in preparation).

Parker supervises students in ancient history, especially those working in the Roman Near East. His current M.A. students are:

Regional editor for the Levant in Richard J. A. Talbert, ed., Barrington Atlas of the Greek and Roman World. (Princeton: Princeton University, 2000).

Romans and Saracens: A History of the Arabian Frontier. ASOR Dissertation Series No. 6 (Winona Lake, IN: American Schools of Oriental Research, 1986).

“Nabataean and Late Roman Domestic Complexes at Petra”, pp. 575-584 in Studies in the History and Archaeology of Jordan XIII. Amman: Department of Antiquities, 2019.

“A Diachronic Look at the Agricultural Economy at the Red Sea Port of Aila: An Archaeobotanical Case for Hinterland Production in Arid Environments”, Bulletin of the American Schools of Oriental Research 376 (2016) 101–120 (co-author).

“The Petra North Ridge Project: Domestic Structures and the City Wall”, pp. 587-595 in Studies in the History and Archaeology of Jordan XII. Amman: Department of Antiquities, 2016.

“Coarse Ware Pottery of the First through Third Centuries at Roman Aila (Aqaba, Jordan)”, pp. 205-215 in Roman Pottery in the Near East: Local Production and Regional Trade. Proceedings of the Round Table held in Berlin, 19-20 February, 2010. B. Fischer-Genz, Y. Gerber, and H. Hamel (eds.). Roman and Late Antique Mediterranean Pottery 3. Oxford: Archaeopress, 2014.

“The Roman Port of Aila and its Economic Hinterland”, pp. 735-743 in Studies in the History and Archaeology of Jordan XI: Changes and Challenges. Amman: Department of Antiquities of Jordan, 2013.

“The Roman Frontier in Southern Arabia: A Synthesis of Recent Research”. Pp. 142-152 in W. S. Hanson, ed., The Army and Frontiers of Rome: Papers offered to David Breeze on the occasion of his sixth-fifth birthday and his retirement from Historic Scotland. JRA Supplementary Series 74. Portsmouth, RI: Journal of Roman Archaeology, 2009.

“The Foundation of Aila: A Nabataean Port on the Red Sea”, Pp. 685-690 in Studies in the History and Archaeology of Jordan X: Crossing Jordan.  Amman: Department of Antiquities of Jordan, 2009.

The Petra North Ridge Project: Reimagining Urban Space: Petra in the 1st through 4th Centuries A.D. was funded by grants from the National Endowment for the Humanities, the National Geographic Society, the Al-Hima Foundation, Foundation for Biblical Archaeology, NCSU, East Carolina University, and private donors.