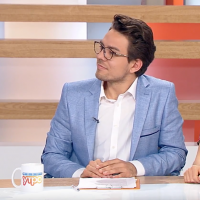 Marat G. Sadana is persuading his doctoral degree at NCSU. He received the B.A. and M.A. degrees in Sociology from Moscow State Pedagogical University. Prior to this, he was studying at the University of Eastern Finland in Joensuu with the focuses on Anthropology and Sociology, and at the University of Maribor in Slovenia, where he was working with Prof. S.Flere on the project of the Dissolution of Yugoslavia. He is a professional TV journalist, who worked as a news writer, news reporter and a special correspondent for the major TV channels in Moscow. His research interests involve: ethnicity, race, urban space minorities, TV news, representation of ethnic city minorities of the TV channels, ethnic identity. Being a journalist by nature he is curious and has his interests also in anthropology, politics, sociology, philosophy, art and music. He is also currently in the process of working on a documentary that will cover anthropological and educational issues in the South Asia.  Currently he teaches Public Speaking course at NCSU.