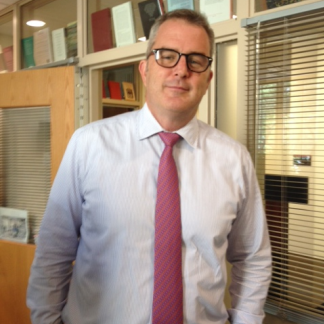 Charles Ludington received his undergraduate history degree from Yale University and his master’s and doctoral degrees from Columbia University. He has published essays on the Huguenot diaspora in Ireland, British and Irish political thought in the late-Stuart era, and the history of wine consumption in Britain from the mid-seventeenth century to the mid-nineteenth century. His first book, The Politics of Wine in Britain: A New Cultural History (2013, paperback 2016), used wine consumption as a window onto English, Scottish, and British political culture from Cromwell to Queen Victoria.  He was elected a fellow of the Royal Historical Society in London in 2014. Since earning his doctorate in 2003, Ludington has taught Early Modern and Modern British history, European history, European intellectual history, and food history at Duke University, the University of North Carolina at Chapel Hill, and North Carolina State University. He has won three teaching awards, including lecturer of the year in the College of Humanities and Social Sciences at North Carolina State University, where he was made a Teaching Associate Professor of History in 2013. From 2015-17, Ludington has been a Marie Curie Senior Research Fellow at University College Cork and Universite de Bordeaux-Michel Montaigne. He is investigating the role of Irish merchants in the development of Bordeaux wine into a luxury product during the period 1700-1855.

A Long Shadow: The Story of an Ulster-Irish Family (CreateSpace, 2017)

“A good and most particular taste: The consumption and meaning of luxury claret in early-eighteenth century England, 1702-1730s” in A. Lynn Martin and Barbara Santich, eds., Culinary History (Brompton: East Street, 2004), 77-86.

“The MacCarthys of Bordeaux,” MacCarthy Culture and History Weekend, Dunmanway, Cork, May 26, 2017

“Irish Merchants and the Creation of Bordeaux Grands Crus Wines,” Worlds in a Wine Glass Conference: Perspectives From the Humanities and Social Sciences, King’s College, University of London, United Kingdom, May 9, 2016

“From the West Country to the World: A Global History of Cheddar Cheese,” Britain and the World Conference, Austin, TX, April 4, 2015

“Why was Handel’s Theodora a failure?” The Theodora Experience: Sense and Sound from the Eighteenth Century, UNC-Chapel Hill, January 27, 2014

“Wine and the ‘First Modern Society Debate’: What the Hanoverian Elite Can Tell Us,” North American Conference on British Studies, Montreal, November 2012

“British Identity in Scotland, 1764-1815: What the Taste for Wine Can Tell Us,” British Society for Eighteenth-Century Studies, Postgraduate Conference, Winchester, June 2008

“Collateral Damage: War and the Development of Luxury Wines, the Cases of Claret and Port,” University of North Carolina School of Law, April 2007

“Be sometimes to your country true: Claret, Port and the politics of wine in England, 1660-1714,” Drink and Conviviality in Early Modern England, University of Reading, United Kingdom, July 2001

“ ‘A good and most particular taste’: The Rise and Meaning of Luxury Claret in England, 1702-1730s,” Second International Conference on the History of Food and Drink, Adelaide University, Australia, July 2001